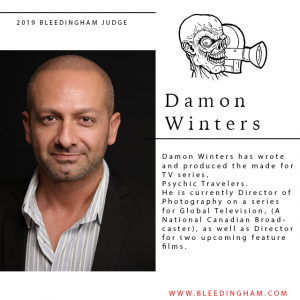 Damon Winters has wrote and produced the made for TV series Psychic Travelers. He co-wrote, produced and directed the documentary Eddie Macken: True Legend; an engrossing tale of the world’s leading horse jumping champion, for European Networks Sky Sports and H&C TV.
He is currently Director of Photography on a series for Global Television, (A National Canadian Broadcaster), as well as Director for two upcoming feature films. “Light of Day” and “Not so Dead”.
He was recently an actor in the TV series “Rogue” and has three three other screenplays in the works for future production.
Damon brings vast practical knowledge from his extensive experience, on-set work and training.