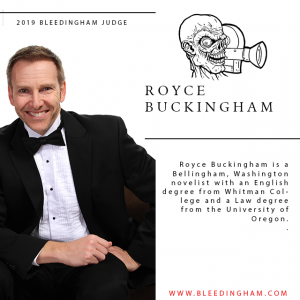 Royce Buckingham is a Bellingham, Washington novelist with an English degree from Whitman College and a Law degree from the University of Oregon.
Royce wrote for 13 years before he sold his first novel, DEMONKEEPER.
He has since made reading lists with his middle grade monster books, has had eleven novels published in more than ten countries, and has hit the bestseller list overseas with both DEMONKEEPER and his medieval fantasy series, MAPPER, which is published in both Germany and the U.S..

Royce has sold novels to Penguin, St. Martin’s Press, and Random House. He sold his screenplay, DEMONKEEPER to 20th Century Fox in 2006, and he attended DEMONKEEPER the stage play at Western Washington University.
His Sasquatch Award winning book THE DEAD BOYS is a ghost story set in Richland, WA, where Royce grew up near the Hanford nuclear plant (which explains a few things).

His YA thriller THE TERMINALS released in October 14, 2014, his adult Thriller IMPASSE came out in 2015, and his medieval epic, THE BLADE OF THE FOREST will be out in Germany this October, 2018.