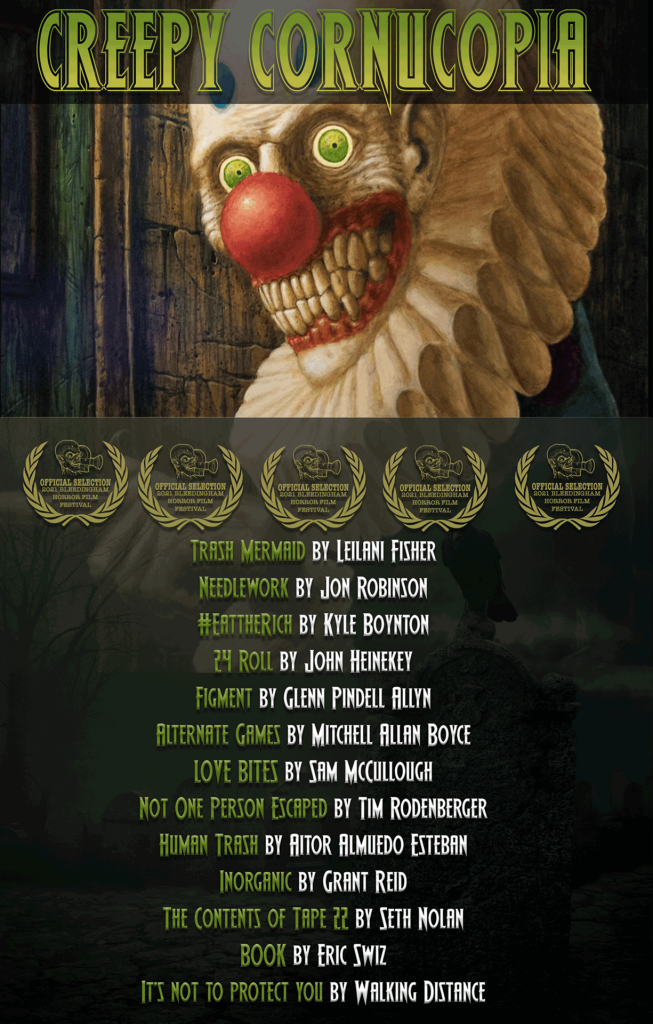 A needle worker is toiling away when his world collides with that of an unknown darkness.

A boy is thrown into a trash container from the future. In his frantic search for the exit, he runs into a mysterious man, who will make him doubt the origin of his own existence.

A well-meaning warlock creates a potion to heal the oceans; however, it gets flushed down the toilet by maintenance before the final ingredient is added, thus polluting all of Bellingham Bay, along with the rest of the world’s seas.

When a man attempts to outperform a machine by replacing it, he finds the line between man and machine is blurred.

The Contents of Tape 22

Not One Person Escaped

When personal tragedy strikes, Dr William Ashby goes to great lengths to find peace, but does he have the resolve to make the difficult choice when faced with a critical decision?

Moonshadow Jones, a “renowned” virtual healer, has finally decided to join the 2020 presidential election, using a platform he believes has wide appeal.

A heartbroken young man thrift shops an old walkie talkie in which he finds written instructions for a ritualistic radio game gambling his life in exchange for his lovesick memory erased.

A young women goes out for a night of fun on the town. When she comes home, she has a mysterious love bite on her neck. Shrugging it off, she under goes a drastic change over the next few days.

A nature lover goes on a camping trip with only herself and her camera. But after her roll of film is developed she finds a disturbing secret in the photos…

When her best friend turns to her for help, a reluctant Gemma shares her darkest and most powerful secret. This was a mistake.