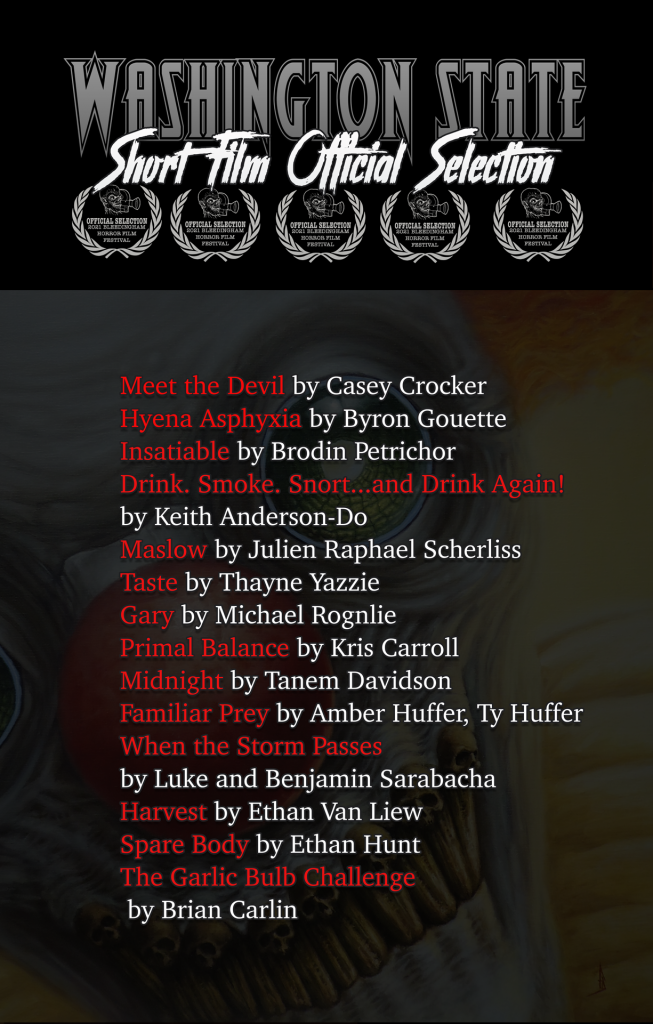 Bleedingham presents the official selection of WA state films for Bleedingham X! Join us as we celebrate 10 years of macabre storytelling, support local WA state filmmakers and check out their tales of terror for 2021!

A murderous photographer eyes his next female victim for a fashion spread – she has other ideas.

A young man is haunted by strange occurrences after he flees the scene of a car accident on a haunted highway.

An addict looking for a fix is surprised when his usual dealer is replaced by a woman, leading to an unfortunate confrontation.

Looking for one-night-stand, a man finds himself in an unsuspecting situation.

Two women meet up for a date in the park. The needs of one outweigh the needs of the other.

A man contends with his new smart home, and the horrors of its past.

A walker ends up as an unexpected piece in a necessary ancient balance.

A traveler returns with an ancient relic, unaware of the terror it possesses.

A masked psycho with a thing for zip ties, finds out what happens when you come between an empowered woman and her familiar.

When the Storm Passes

“Then, in one moment, she put forth the charm of woven paces and of waving hands, and in the hollow oak he lay as dead, and lost to life and use and name and fame. Then crying ‘I have made his glory mine, ‘ and shrieking out ‘O fool !’ the harlot leapt adown the forest, and the thicket closed behind her, and the forest echo’d ‘fool'”…

An aging farmer struggles, with his spiral into eternity.

Mark Harris is an intrepid journalist for Vampire News Tonight! on Cascadia Valley Public Access TV. His latest investigation into vampire teens engaging in a dangerous challenge will yield some fascinating insights!