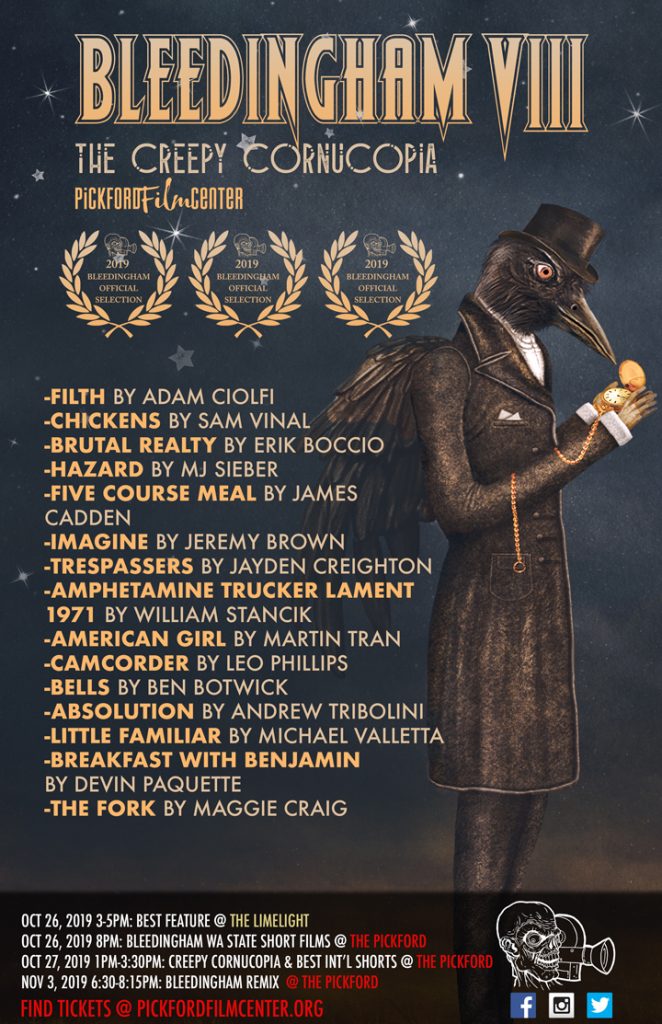 Welcome to the The Creepy Cornucopia!

This block of films features an official selection of local and out of state/ international films.

This year was a very competitive for the festival and we feel this amazing quality will reflect to our Cornucopia attendees!

So get yourself in the mood for tales of horror and clever dread,

as this selection will set the tone for your Halloween Festivities!

Find your tickets at the Pickford Film Center!

The Fork by Maggie Craig

People who live in the country shouldn’t name their animals. Sophie makes friends with her next meal then struggles with the ethics of her first slaughter.

Bloodied, bruised and left for dead a man will stop at nothing to exact gruesome revenge on those who wronged him. Aggressive, raw and unrelenting, director Adam Ciolfi will change the way you think about animation.

With 9 major awards and 16 nominations to date, FILTH is aggressively building its reputation on the film festival circuit.

The Summoner is a heavy metal demon rocker, but that’s just his day job. He works a 9 to 5 like every other average Joe (or in this case average ghoul). He’s become a little disappointed with his direction in life.

He wants to be more than just a weapon wielded for evil and rock, and would like to focus on his true passion: flipping houses. But soon enough an attack from a vicious gang of realtors forces him to embrace his awesome powers of destruction, and gain the confidence to achieve his dreams.

A group of young friends venture out to a remote, uninhabited island in the Northwest for one last hurrah. But there are unknown hazards in their way.

Mark and Jenny agree to take part in a mysterious experiment for money. Things get exceptionally messy.

Based on the short story by Josh Saltzman:
https://www.wattpad.com/86624898-strange-yarns-five-course-meal

This award winning short takes you on a journey through the mind of a child and the terror his toys must face at the hands of his wicked imagination!

Ben and Lucy are siblings who are travelling interstate to visit their parents. When their car breaks down on a desolate rural road, they are forced to seek help at a nearby farming estate.

Cut off from the outside world, they soon make a terrible discovery…

In 1971, a trucker remembers a woman with bruises on her knees.

When the time comes to put away childish things…

A lovely backpacking trip is not the couple’s dream it seems when bloody love lurks around every bend.

A father learns the secret behind his son’s strange nightly ritual.

When a young priest is assigned to a dying parish he is forced to confront his own demons.

A small mysterious girl is abducted by a pair of shadowy individuals with questionable motives. Their fate, however, becomes sealed as the young girl’s grizzly guardian hunts them down in order to be back by her side.

Breakfast with Benjamin by Devin Paquette

A look into the mind of demented chef Benjamin Bates in his popular cooking shown as reality falls apart and shows what really is going on.