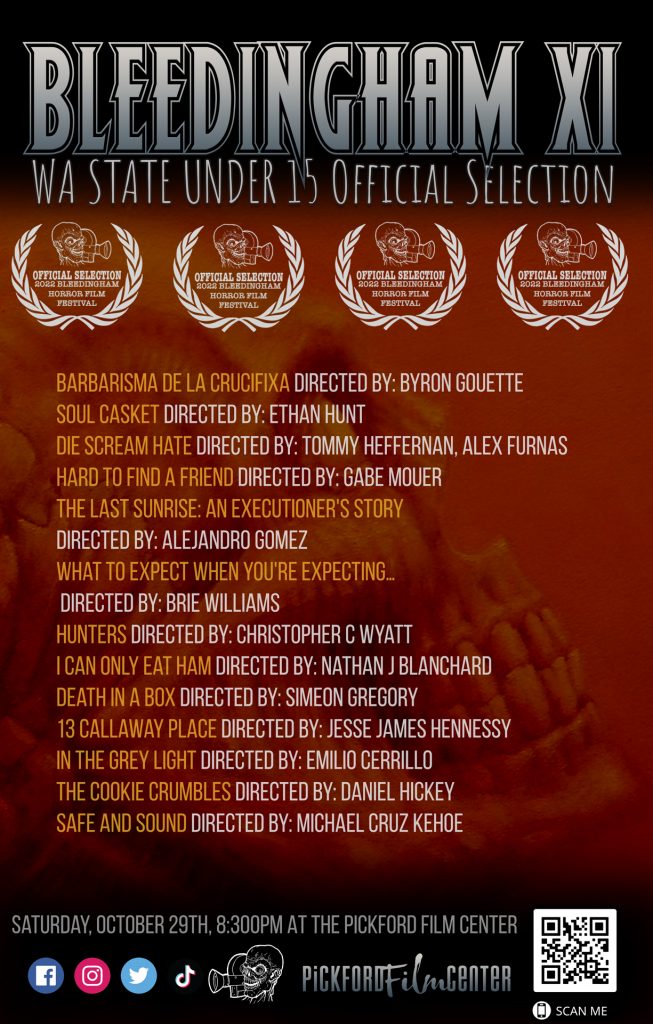 Bleedingham presents the official selection of WA state films for Bleedingham year 11! Join us as we celebrate 11 years of macabre storytelling, support local WA state filmmakers and check out their tales of terror for 2022!

The Last Sunrise: An Executioner’s Story

A horror/drama short film about a family of three out on another night of vampire hunting.

It’s cookie season. You can’t resist. No one can resist.

What to Expect When You’re Expecting…

A short horror film about the lengths some of us go to get pregnant.

Death in a Box

A mysterious organic box appears floating above the ground just outside of town.

Samara convinces her best friend Ava to check out the box and its sinister revelations quickly unfold.

Barry and Laura drive out to interview a secluded Claire Eastman,

survivor of a serial killer rampage, for their soon to be best selling book about Final Girls.

I Can Only Eat Ham

She can only eat ham.

In The Grey Light

After tragedy befalls his family, a guilt-laden ex-Marine must dive inward and learn self-forgiveness

before his personal torment consumes everything he’s ever known.

Hard to Find a Friend

What happens when two idiots go hunting and get into trouble?

A young girl finds herself caught in the battle between witches and witch hunters.

A teenager’s camping trip turns to horror as the unnerving discovery of an ornate box that has the ability to completely contain a human soul leads him to experience perplexing, unimaginable occurrences.

A deformed ballet dancer finds a pair of cursed shoes forcing her to focus on becoming “beautiful”instead of her dance passion.

A young woman suspects an ominous presence in the place she feels safest. Home.