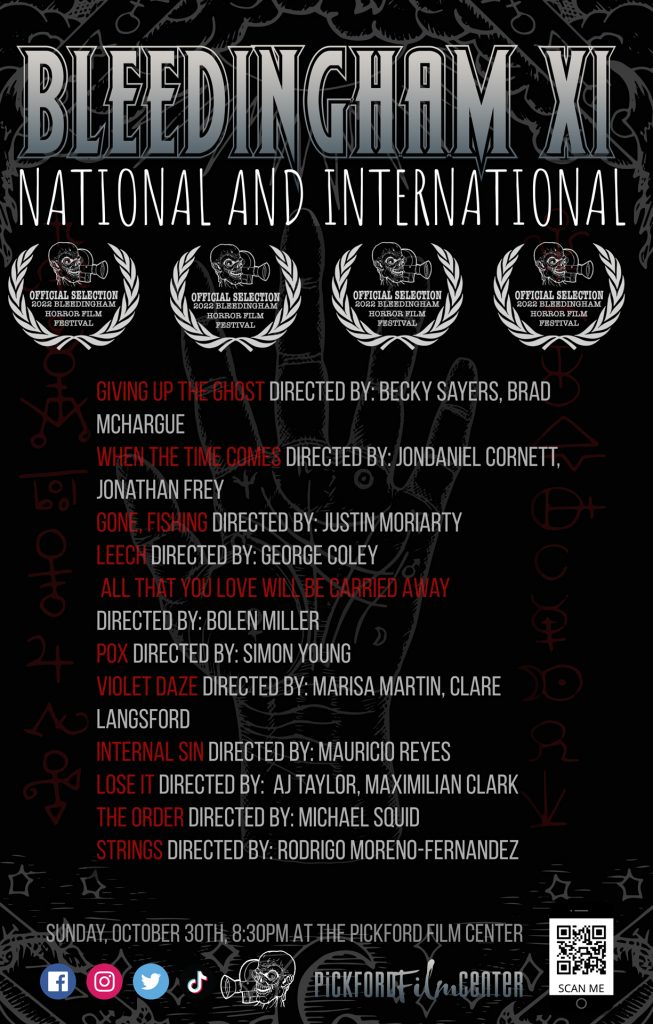 On the eve of Halloween, Bleedingham presents a terrifying selection of the best of national and international short films.

These films can only be seen in the festival circuit, so this is your chance to get a taste of frightening tales from all over the world in one thrilling block!

Penny has her share of demons, and she’s about to take on one more. Despite her inability to play, Penny has big dreams of becoming the world’s greatest axe player. After stealing one from an antique shop, she decides to break it in at the local punk bar she frequents. Things don’t go very well, and Penny ends up face down in the alley after being thrown out by the owner. Defeated, she quickly turns to a familiar vice, shooting smack to ease the pain. As her high subsides, a dark presence approaches her with a proposition: Penny gives up three souls, and all her dreams come true.

A food delivery driver struggling to make ends meet accepts an extremely high-paying gig. It’s soon clear, however, that this order is anything but ordinary.

An outdoorsman is spending a relaxing day at an isolated fishing hole. However, after losing a promising bite on his line and taking a moment to enjoy his lunch, the fisherman is pulled into a horrifying fight for his life with an unseen predator in the water that has turned the tables on him.

Violet and Daisy have been best friends since they were five. Total besties. BFFs. Joined at the hip. How close can two best friends get? What would they do if anyone tried to separate them?

An elderly blind woman is unaware of the stranger who has secretly nested in her home. Her carer thinks she lives alone; when he visits, the stranger disappears. But as peculiar details reveal themselves around the house, the carer’s suspicions lead him to uncover the disturbing secret hidden within.

In a burned out shack in the great American dust bowl, a pox rages through a pioneer family.

As a religious couple sequesters together in the name of survival, unwelcome sexual tension quickly begins to threaten their safety.

Giving up the Ghost

Parents-to-be Scott and Arianna don’t quite see eye to eye on a few things, particularly that Scott’s best friend, Harold, lives in their basement. And the fact that Harold happens to be a ghost.

Stephen King’s: All That You Love Will Be Carried Away

Based on the Stephen King short story: A middle-aged traveling salesman contemplates his life choices at a a shitty motel in Nebraska.

When the Time Comes

A grieving husband chooses to fulfill his wife’s dying wish by leaving the safety of his home and venturing into an apocalyptic landscape in search of a cherished memento.