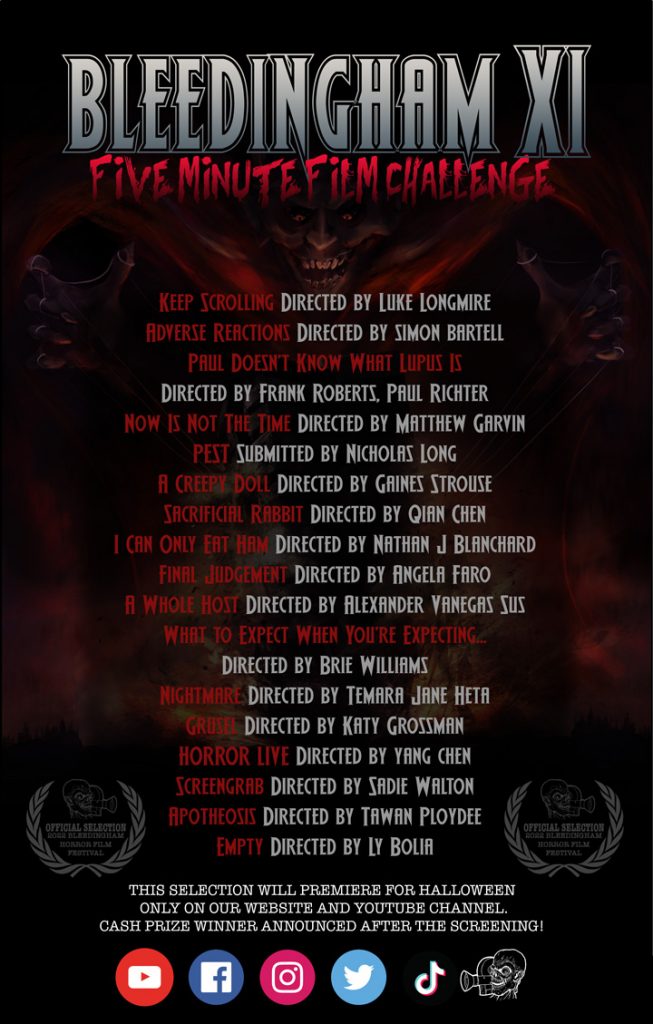 Binge them all at once or throughout the night as you prepare for any Halloween plans or you can play them for your guests at your own Halloween party!

Winner of the 5 minute film challenge gets a $200 prize and will be announced on our social media at 6pm on Halloween!

A young girl while on TikTok scrolls onto a haunted livestream.

A young lady gets an experimental vaccine.

Paul Doesn’t Know What Lupus Is

Paul is really concerned for his friend Bronson, who’s been recently diagnosed with Lupus.

Now Is Not The Time

A dark secret from the past puts a couples relationship to the test.

You wake up to the sound of knocking from inside of your closet.

Strange things happen when a man buys a beautiful doll at a yard sale.

Sacrificial Rabbit is based on clues that gradually enter the trap, starting from a girl who is hypnotized after following a rabbit into a hole, trapped in a room for a series of killings that follow instructions. she was arranged to escape here, but chose to return.

I Can Only Eat Ham

She can only eat ham.

A man of the cloth takes it upon himself to punish the wicked of the world until he is taught the error of his ways.

Dashielle Dellamorte, horror host extraordinaire, invites us to explore the worst horror movie ever made… because, it’s just a movie right?

What to Expect When You’re Expecting…

A short horror film about the lengths some of us go to get pregnant.