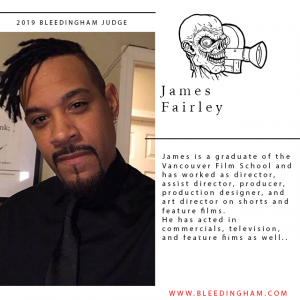 James is a graduate of the Vancouver Film School and has worked as director, assist director, producer, production designer, and art director on shorts and feature films.
He has acted in commercials, television, and feature films as well.
Currently, Mr. Fairley is a special FX makeup artist at MastersFX Studio, where he has worked on shows such as FALLING SKIES, TRU-BLOOD, ARROW/FLASH/LEGENDS OF TOMORROW, ALMOST HUMAN, I-ZOMBIE, The 100, The ORIGINALS, BELKU; and many others.